Since Eagle Rock Music Studio is located in Los Angeles, California and students and parents frequently ask us what the best higher education music programs in the area are, we thought we would share a few with you that receive the most acclaim. The four we have selected offer fundamentally different approaches, but all are good options depending on what the student is looking for. 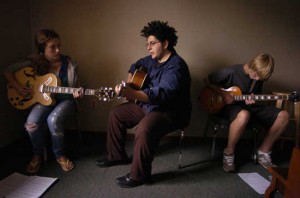 Located in Pasadena, the Los Angeles College of Music was founded in 1996 and is a private, for-profit music school that only offered a six-quarter associate’s degree until the fall of 2014, when it began offering a twelve-quarter bachelor’s degree. The school is accredited by National Association of Schools of Music.

The true draw of the school is its access to the faculty, which consist of working professionals, including Art Alexakis, the frontman of the popular ‘90s alternative band Everclear. Degrees are offered in performance, production, songwriting, and composing for visual media.

Conservatory of Music, The Colburn School

The best part about Colburn is that it is free — each and every Colburn student receives a full-ride scholarship, which includes tuition, room and board, and a living stipend. The worst part is that it is extremely difficult to get in, with around 25 spots open per year; the acceptance rate is around 11%.

Colburn’s conservatory focuses entirely on performance; there is no composition program. The Conservatory of Music, founded in 2003, offers a Bachelor of Music and a Master of Music diploma. The Colburn School was originally founded as a preparatory arm of USC’s Thornton School, but has since achieved its independence; it is located across the street from the Walt Disney Concert Hall downtown.

Unlike the super-selective Colburn School, the Musicians Institute admits 96% of its applicants, and with 1,425 students, is one of the largest music schools in the country. Like the Los Angeles College of Music, the Musicians Institute is a private, for-profit music school that leverages its proximity to Hollywood — it is literally located at the intersection of Hollywood and Highland — to draw students from all over who are looking to break into the music industry via the Los Angeles music scene.

With a long list of successful alumni that includes Jeff Buckley, Rivers Cuomo, John Frusciante, and Steve Vai, Musicians Institute offers programs in virtually every aspect of music, from performance to engineering to guitar craft to independent artistry to music business.